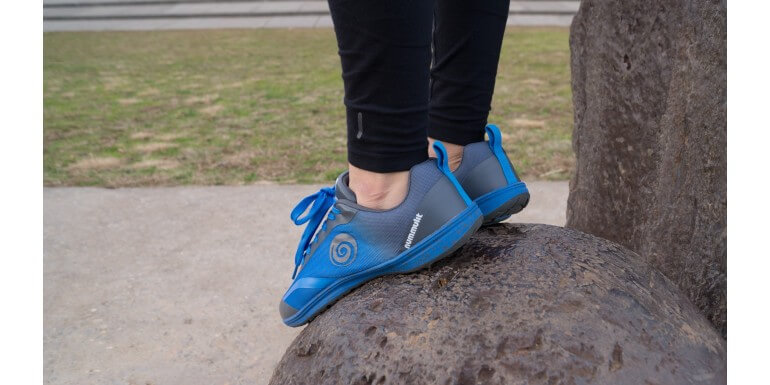 Minimalist footwear is becoming increasingly popular, but the transition from a conventional type of footwear must be slow and progressive, re-educating our feet for a new way of moving where they will regain their strength and flexibility.

All this so that our body and mind can take advantage of all the aids that this trend offers us.

Next, we highlight the ten most important benefits of using minimalist footwear:

1. Strengthens the foot and leg

Conventional footwear has numerous external elements that constrain the foot, so our muscles tend to weaken due to another passive system performing its function of support.

Nowadays, many conditions usually try to be solved with orthopedic insoles but, in reality, most of the time these are only palliative and do not correct the root of the problem.

What's more, they can aggravate it, since the atrophy of the bones and muscles of our feet is due to the use of the wrong footwear.

Minimalist footwear does not have elements of cushioning, control or stability, so the muscles of the foot and the entire leg must be strengthened and prepared to meet those needs, so it keeps them in better physical condition. (1)

Foot has total freedom of movement since minimalist footwear only protects the foot from the weather or possible harmful external elements, without retaining it in artificial positions or forcing it into unnatural postures.

3. It favors a correct footprint

The natural tendency when walking barefoot is to step with the midfoot or metatarsals, which is the innate way of cushioning the impact with the ground.

Conventional shoes usually have cushioning and a greater rise in the back than the toe.

This causes a shortening of the Achilles tendon and an overload of the body's weight on the fingers, which favors bad posture and tension in the pelvis, knees, lumbar or even neck.

Minimalist footwear contributes to a neutral footprint, using the midfoot, improving support and reducing pressure from other parts of the body.

Although the lack of habit and preparation of our muscles for this type of tread can cause problems in the processes of adaptation to this type of footwear, so a gradual transition of one to another. (2)

In relation to the previous point, this modification of the way of stepping allows making the most of the ankle muscles and the strength of the Achilles tendon, which with its extensor power is the true and most effective motor of the march.

In addition, the lightness of minimalist footwear makes us perform more with less metabolic effort, which also means energy savings.

Minimalist footwear aims to produce, in the wearer, a sensation as similar as possible to going barefoot, that is why it does not present any element that compresses the foot and is made of flexible materials that adapt morphologically to it.

For these reasons it does not exert any pressure on the limb or generate friction when walking or running as conventional footwear can.

The neutral tread characteristic of minimalist footwear, as indicated above, reduces muscle and joint tension by promoting the main support of the body on the forefoot of the foot, reducing the transitory impact and stress on the hip and knee, this being the most efficient biomechanically pattern.

The use of conventional footwear, due to its elevation in the soles and heels above all, affects the plantar fascia and reduces the range of motion of the ankle.

This favors the wear of joints, muscles and bones, in addition to altering body posture when walking or running, affecting especially the knees, hips and back.

In societies that have never worn footwear, the toes are spread, offering a much wider and more stable base of support

Conventional footwear tends to narrow at the toe, which very frequently causes painful deformities in the fingers and in the middle area, such as Hallux valgus.

Minimalist footwear is characterized by presenting a wide last to avoid any type of pressure on the toes. (3)

Minimalist footwear does not have cushioning or insoles with reinforcements, so it is itself more stable and prevents damage from twisting, for example.

In addition, a foot accustomed to this type of footwear is more prepared to adapt to different types of ground, since it has a greater sensitivity to stimuli (4).

9. It allows to develop the proprioceptive system

Shoes with minimalist characteristics, as mentioned above, favor natural mobility and, due to their own characteristics, increase the perception and sensations of the foot on the ground underfoot.

This allows to develop the proprioceptive system, through which the brain receives and processes all the information about the position or movement of the different parts of the body in relation to each other and in relation to their base.

For this reason, the use of minimalist footwear helps to improve balance, coordinate movements and keep the brain at an alert level that protects us against possible injuries.

And it is that by becoming aware of all the body structures (muscles, joints, tendons, bones...) it is able to react quickly to a bad movement, for example.

10. Encourages connection with the environment

Minimalist footwear helps to connect with the terrain and, therefore, to be more aware of each of the movements made and each step.

It allows the thousands of nerve endings in the foot to experience the sensations on the ground at a higher level than conventional footwear, and this sensory richness carries countless benefits for our nervous system, such as reducing stress or anxiety levels, for example.

From Nummulit we invite you to consult the characteristics of our minimalist shoes casual, and sneakers.