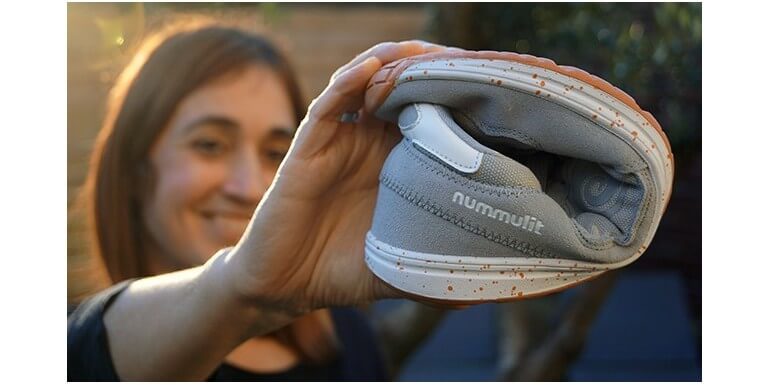 The minimalist footwear is characterized by its flexibility and lightness, by its wide toe box that does not apply any pressure on the fingers and because the outsole does not have an inclination between the toe and heel. In addition, it is low thickness, thus allowing greater ground sensitivity.

These particularities allow minimalist footwear to respect the natural movement of the foot at all times without interfering with its anatomy, being the sensation when walking the most similar to what we would have if we did it barefoot.

Conventional footwear, despite being able to feel more comfortable at first, is not necessarily the most convenient for the health of the feet, due to their support and inclination. (1)

In addition, it is usually the origin of many joint ailments and malformations in different parts of the body such as the back, knees, hips or the foot itself. (2)

Minimalist footwear, on the other hand, is the most recommended for our feet and joints in general, as the numerous benefits have been demonstrated that contributes to our body. And it is that it prevents us from injuries, helps to strengthen the muscles of the feet and legs, improves balance and reduces general tension and stress. (3)

For this reason, its use is spreading and it is becoming popular among the general public, not only in the sports field.

However, it is not an "easy" shoe a priori, so it is important to take into account some prior considerations if we are determined to use it.

The transition between conventional footwear and minimalist footwear must be made progressively and, like all drastic changes, entails a adaptation period that, initially, It may seem complicated.

The fact of being used to cushioning shoes, thick soles and/or elevation in the heel makes us change our natural way of walking. And, therefore, the first times we wear minimalist shoes, the sensations can be discomfort and strangeness in the footprint.

Although it is a more natural way of walking, the truth is that after having done it for years with cushioned shoes, our muscles are not prepared as they should.

Experts recommend a progressive transition, which involves learning and re-education of our feet, in order to get the maximum benefit from minimalist shoes and take advantage of all the advantages they offer us. (4).

Before using minimalist footwear, we must prepare our feet and for this it may be useful to perform a series of exercises that help us to strengthen their muscles and joints.

In addition, an adaptation time with shoes or sneakers that have some minimalist aspects, but that are still not radically different from the conventional footwear that we use today, can help to prevent change be so rough.

The primary objective for a successful transition will be strengthening the foot muscles, so walking barefoot whenever possible is highly recommended.

Before walking long distances or running, with minimalist footwear, it is preferable to start by taking short walks or practicing barefoot in your own home.

Another key aspect that differentiates one shoe from another is that we will modify our footfall and, instead of initially impacting with the heel, we will do so with the middle part of the foot and the toe. This habit is difficult to correct, since conventional shoes, due to their shape and inclination of the sole, favor that heel strike.

In the process of adaptation to minimalist footwear it is convenient to alternate both; At first, the time we wear conventional footwear will be longer, but we will invert it as our feet get stronger and get used to the new conditions.

There are some specific exercises that can favor adaptation to minimalist footwear: Perform circular self-massages on the sole of the foot, try to move your toes independently, walking on tiptoe and on your heels, trying to lift objects with your toes, rolling your feet on a ball, just going barefoot around the house, etc.

All these exercises will help to strengthen the plantar arch, the calves and hamstrings and the Achilles tendon will help to regain the separation between our fingers and will allow us to recover the natural posture of our body with the adaptations muscular and postural necessary.

Main difficulties in adapting to the use of minimalist footwear

Despite the many benefits that minimalist footwear brings to our body, it may not all be advantages if the transition is not carried out correctly and gradually.

The first negative factor for someone who starts in this type of footwear is sensitivity to the touch of the ground, this is due to the low thickness of the sole and its flexibility.

For this reason, on rough terrain, wearing minimalist shoes or sneakers can be especially difficult, mainly at the beginning.

It must be borne in mind that with minimalist footwear our feet are less protected and are more vulnerable to impact or injury caused by external elements.

Another drawback for beginners, due to lack of habit and little or no preparation of our muscles to this new type of footstep and body posture, may be the appearance of muscle overload or joint pain, for example , until we adapt to its correct use.

In conclusion, it is important not to be extreme when choosing footwear. The transition from a conventional to a minimalist type must necessarily go through a period of adaptation and be done gradually.

It is not necessary to completely stop using conventional shoes or high heels sporadically, but it is important to know the benefits that minimalist footwear can offer us and enjoy the change process, since our feet will gradually appreciate it and will gradually adapt to a healthier way of walking.

From Nummulit we invite you to consult our catalog of minimalist casual and sports shoes. They stand out for their comfort from the first use.